We had so much fun last night at the virtual book launch for Lennie Goodings’ memoir, A BITE OF THE APPLE! Lennie had two great discussions: first with author Emma Donoghue and then with Ben McNally from Ben McNally Books. There were also video shout outs from Margaret Atwood and Louise Dennys, plus a book giveaway. Not to mention, you can hear Lennie read a passage from her new book!

In case you missed it, you can still watch the video now:

Want to see more of Lennie Goodings? Lennie will be participating in two events at the Toronto International Festival of Authors today. She will be interviewing award-winning poet Lorna Crozier today at 3:30 PM EDT for the “Poetry of Love & Loss” event, and then she will be interviewing author and journalist Carl Hiaasen at 9 PM EDT for the event “Satirical Masterpiece”. Both events will be streamed live.

Lennie was recently interviewed by Elizabeth Renzetti at The Globe & Mail about her memoir and her groundbreaking work at Virago. Check out the interview here.

Get your copy of A BITE OF THE APPLE today!

Art of the Short: Video of the Reading with Three 2020 Scotiabank Giller No... 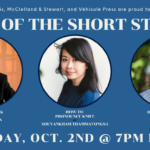 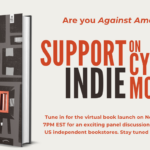