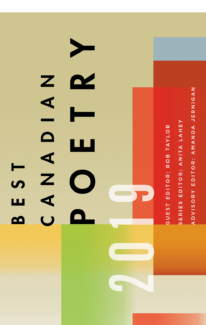 I’m a poet, short fiction writer and editor. I teach creative writing part-time at Simon Fraser University. and live in Port Moody, BC, with my wife and two children.

My recent collection, The News (Gaspereau Press, 2016), is a sequence of 36 poems, one per week during my wife’s pregnancy with our first child. The poems weave together the “news” of the pregnancy, the political news of the day, and quotes from literature (“the news that stays news”). I like to look for big ideas that are hidden away inside small things, especially the political inside the personal.

I also have a strong interest in sound in poetry—rhythm, rhyme, alliteration, repetition—and in humour (including, perhaps especially, humour in the face of difficulty).

You recently edited What the Poets Are Doing: Canadian Poets in Conversation. In what ways did that prepare you to edit Best Canadian Poetry? How are those two projects completely different?

The two were very different. With What the Poets Are Doing I was soliciting as-yet-unwritten material from poets and then editing it into its published form. With Best Canadian Poetry the material was already written and submitted (in a sense), and the editing work on the poems themselves had been completed by the various magazine editors. One was like planting trees and trusting they’d bear fruit, the other was like wandering around an orchard someone else tended and filling my basket with whatever caught my eye.

Though it followed a rather different process, What the Poets Are Doing prepared me for Best Canadian Poetry by establishing a spirit of collective generosity in which to work. Both books are a celebration of poetry as practiced in this country, and the compiling of each involved the work of a great number of talented and tireless writers and editors. My enthusiasm in being able to publish writing by such remarkable poets in What the Poets Are Doing, and their willingness to make something new and vibrant with me, fueled me to do the same in Best Canadian Poetry 2019.

In reading the gazillion lit mags you had to read to choose the fifty poems in this volume, what surprises did you encounter?

Every one of the fifty poems was a surprise! That was the only way they were ever going to stand out amidst the gazillion lit mags (in reality, a mere 82 magazines [~300 issues], and over 2,100 poems). Each of these poems contains something—an image, a scene, an idea, a joke, a line of dialogue, a structure, a voice—which grabs you and demands your attention.

More generally, I was surprised to find that no magazine (or handful of magazines) has a monopoly on these “surprises.” The poems that I was drawn to came from magazines across the country, small and large, online and print, upstart and well-established. It made me appreciate a series like Best Canadian Poetry all the more—nowhere else could even a fraction of these poems have been gathered in one place.

You’ve been editing your poetry blog, Roll of Nickels, for thirteen years now. Could you comment on any trends, movements, or big-picture changes you’ve seen in Canadian poetry during that time?

As I note in my introduction to Best Canadian Poetry 2019, the biggest change to the poetry published in Canada has been a move away from prioritising style and towards prioritising content. In Best Canadian Poetry 2008, the inaugural edition of this series, guest editor Stephanie Bolster observed that, “Quirky, noisy, dense, disjunctive poems seem to be on the increase” and that “there is almost no overtly political work.” One could say the opposite is now true. The poems of 2019 are easier to understand than those of 2007, and are more explicitly engaged with the questions of our political moment (and—oof—what a moment it is).

That said, the majority of poetry in this country is as idiosyncratic as the poets themselves, and removed from conversations of “trends” and “movements”—just singular poets working away at their singular desks. I very much believe it’s mostly the magazines that are changing: what gets published from year to year varies far more than what gets written.

One way magazines have been changing has been to open themselves to a wider range of voices. This has partly been spurred by new online magazines, founded and edited by younger and more diverse editorial teams, but editorial boards at our print magazines have been slowly diversifying as well, and special issues (or whole magazines) devoted to Indigenous, racialized, or LGBTQ+ writing are now rather commonplace. It’s no small thing.

If you could make a wish for the future of Canadian poetry, what would it be?

I don’t want anything different from the poems themselves. They need to be what they need to be, for both their poets and their readers. To ask poems to transform to my preferences (or any one person’s) would rob the art of one of its greatest powers: to speak directly to a particular you in a particular now. I can’t predict what you’d like or what you’d need (and you probably can’t either!), so I welcome everything, even if much of it doesn’t “do it” for me.

For the culture of the poetry world (and for poetry in our wider culture), my one request is to read the poems. Don’t talk about reading poems, don’t scan lists of award winners and best-sellers, don’t scroll briskly through bookstore shelves or Instagram feeds, don’t just see who “made it” onto the list of contributors to this year’s Best Canadian Poetry, don’t run around worrying about the future of Canadian poetry, just read the damn poems! They are all that really matters. Make a quiet space, here or there during your busy days, in which a poem can do its work. Make that a practice in your life. You will be rewarded for that devotion many times over.

Poetry! I fell behind in my poetry reading when I was reading all that poetry for Best Canadian Poetry . . .

I recently finished Matthew Walsh’s These are not the potatoes of my youth, Karen Solie’s The Caiplie Caves, Ilya Kaminsky’s Deaf Republic and Emily Davidson’s Lift, and I’m about to start in on Shazia Hafiz Ramji’s Port of Being and Al Rempel’s Undiscovered Country.

Biblioasis Is Hiring! An Interview with Caroline Adderson, Editor of Best Canadian Stories 2019
Scroll to top