Blog - Latest News
You are here: Home / Latest News / An Interview with Taras Grescoe, Author of Possess the Air

Possess the Air: Love, Heroism, and the Battle for the Soul of Mussolini’s Rome by Taras Grescoe came out on October 15th!

Here is a Biblioasis interview with Taras Grescoe, author of Possess the Air. 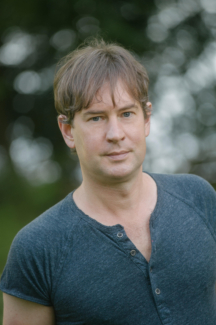 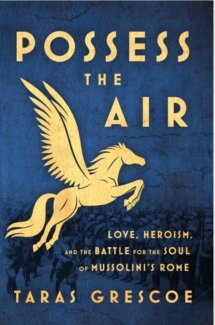 I’m the son of writers. My parents started out as journalists, and became editors (they founded magazines in Vancouver, Calgary, and Edmonton) and authors. I grew up having every sentence I uttered analyzed, every story I told at the dinner table questioned and edited—for clarity, for logic, for good story-telling qualities. I loved to read, was curious about the world, and attended alternative schools where I was encouraged to write and research projects. In my teens and twenties, I resisted my apparent destiny—to be a writer—but around the age of 30, my background and training, perhaps my genes, kicked in. Since then, I’ve written seven books, and a whole lot of features for magazines and newspapers. I can’t stop myself. I alternate between turning my own experiences into stories—non-fiction narratives, for want of a better term in the English-speaking world—and, when I can’t get out into the world to have more experiences, looking for true stories that I think would make great books.

How did you first hear about Lauro de Bosis? What was your research process like?

Before Lauro, there was Rome. I visited it for the first time on assignment, following in the footsteps of Gregory Peck in Roman Holiday for a travel article for National Geographic Traveler. I had gone through a bad break-up in Montreal, it was February, and a week in Rome snapped me out of my heartbreak and torpor. Since then, I’ve been able to explore the city deeply, through repeat visits and obsessive reading.

I first encountered Lauro’s name while reading Iris Origo’s extraordinary memoir A Need to Testify. (Origo was an Anglo-American expat who bore witness to the rise of Fascism from her farm in a Tuscan valley.) Lauro’s courage and intelligence spoke to me, and when I learned he was a child of Rome, and his life was deeply entangled with the city’s history, I knew I’d found a story that would bring a lost city—Rome as it was before Mussolini and the Fascists remade it in their image—back to life.

The research involved on-the-ground visits to all the sites associated with the life of Lauro de Bosis—including the palazzo where he lived in Rome, now converted into the offices of an architectural firm. The book tells the parallel story of Gilbert and Mary Stewart Bagnani, a pair of Canadian archaeologists who witnessed the transformation of Rome under the Fascists, and I visited the places where they lived in Rome—including Gilbert’s childhood apartment, now the heavily-guarded German embassy. And I spent weeks in archives at Harvard, in New York, in Toronto and Peterborough poring over the letters and documents that helped me to tell their stories. The most remarkable of these institutions was the Archivio Centrale dello Stato in the Fascist-built Roman suburb of EUR, which houses the files of Mussolini’s political police, and where I found stories that shed light on what happened to Lauro after his successful attempt to bombard Mussolini’s palazzo in the center of Rome.

You called Possess the Air “an important story for our time” in light of our current political climate. Can you elaborate on that?

We’re living in a time when the strongman—the authoritarian, the autocrat, the dictator—is once again on the rise. Instead of radio and newsreels, the modern version of Mussolini is communicating through Twitter and cable-news networks. And people in the Western world once again seem willing to “voluntarily abandon free institutions”—which scholars agree is a crucial precondition of Fascism and authoritarianism. (I’m very much thinking of Trump and his disturbingly successful attacks on the free press, the judiciary, the rule of law, and all standards of decency, but also Bolsonaro in Brazil, Orbán in Hungary, and the figures of the xenophobic right on the rise in France, Italy, and Austria.) This is happening because the generation that remembers the sacrifices it took to defend these institutions—the generation that fought the Second World War, and oversaw the decades of peace and international cooperation that followed the war—is dying off.

When the Italian Fascists were seizing power through the use of violence, and Il Duce was giving that violence legitimacy by winking at the brutality invading everyday life, Lauro de Bosis chose to resist. He did it not in the name of Communism or Socialism, but in accordance with his own deep patriotism and love of liberty. His is the story of a principled individual took a courageous stand for liberty, reason, and peace at a time when his fellow citizens seemed all too willing to embrace irrationality and belligerent nationalism.

A National Post review for your previous book, Straphanger¸ called it “a book by somebody who loves cities for people who love them.” You’ve written about public transit, overfishing, and the underbelly of old China—all of your books have covered vastly different topics so far. How does Possess the Air fit into your body of work?

There is method to—or at least a rational explanation for—my apparent madness. I started out as a travelling writer, which I saw as a way of rubbing up against the world as a way of challenging and expanding my own worldview. After moving to Montreal from Vancouver, I explored my new home, Quebec, in Sacré Blues. For my second book, The End of Elsewhere, I put my belongings in storage and set out on a year-long voyage across Europe and Asia to look at the way mass tourism is changing the world. Three more polemical travelogues followed, in which I looked at issues that fascinated me: in The Devil’s Picnic, I explored the negative impact of prohibition; in Bottomfeeder, I looked at the devastating effect of human appetite and greed on our lakes, rivers, and oceans; in Straphanger, I made the case, through trips to 14 cities around the world, that our urban future is better

All of these books involved a lot of travel. When I became a father in my 40s, and decided to spend as much time as possible with my family in Montreal, I realized I could still travel—in time, and in my imagination. Shanghai Grand took me—and I hope my readers—to a lost world, the Treaty Port of Shanghai before the Communists took power in 1949. Possess the Air is a voyage to another lost world, the atmospheric Rome of the 1920s and 1930s, even as it was being transformed into the pretentious Third Rome of the Fascist imagination.

If there’s something that links all my books, though, it is writing about place. I fall in love with a spot on the globe—more often than not, a city—and strive to find a way to explore that place, and bring it to life on the page.

I’m reading The Road to Oxiana, Robert Byron’s record of a voyage through Persia and Afghanistan in the 1930s. It’s an unjustly neglected masterpiece—Paul Fussell rightly calls it the Ulysess or Waste Land of modern travel writing—and the richest of texts imaginable. Discovering this prolific and intellectually challenging writer, whose pen was stilled when his ship was torpedoed in the Second World War when he was en route to Cairo, is an unexpected delight.

Possess the Air is available for purchase here.

Next Week at Biblioasis: We Welcome Benedek Totth, author of DEAD HEAT An Interview with Pauline Holdstock, Author of Here I Am!
Scroll to top