An Interview with Andrée A. Michaud

Andrée A. Michaud, author of Boundary, spoke with Natalie Hamilton about the influences of place and the senses on her fiction, using memory as inspiration, and how boundaries can obscure or accentuate differences.

1. You are a prolific writer, well-known in Quebec for your award-winning novels. As an introduction to English language editors and reviewers who may not yet know your work, could you start by telling us a little bit about yourself and your writing?

First of all, I have to say I was born in the country and that the liberty of my childhood in the fields and in the woods surrounding my village has profoundly influenced my work. I always say that I write first with my senses, with the smells, the colours, the winds, the rains that are crossing the setting of my novels, and I rationalize after. My novels, in fact, are a melding of my very Cartesian mind and a sensibility in me that makes me as sensitive to the tiniest ray of light as to the fury of the storm.
Consequently, I don’t work with a plan. Never. I want to be free, to have no bonds, so I can let the rain or the tempest enter by the window and penetrate the story.

I also worked for about ten years, full time and part time, for a research group specializing in early cinema. Among other tasks, I had to describe short films, shot by shot, and I think this exercise had an influence on my work, on the way I describe places, on my cinematographic vision of the plot.

2. When it was first published in French, Bondrée won both the Governor General’s Award for Literature and the Arthur Ellis Award for Crime Writing, crossing over the literary-fiction/genre-fiction divide, which had been quite wide in prize culture especially. How did it feel to win both prizes?

It simply proves to me that literature is not a question of genre, that a good book is a good book, and can gather many kinds of readers. Having said this, I admit that it was a great pleasure for me to win on both fronts. I won my bet: you can write literary fiction, whatever subject you choose to write on.
(I’m also happy to tell you that Bondrée won the Prix des lecteurs Quais du polar in France at the end of March.)

3. Can you tell us a little about the origin of the novel?

I have to say, first, that Bondrée is a real place where I was going with my father when I was a little girl. I never went back to that place after his death, when I was ten years old — so it was in the sixties. At that time, there was only two or three shacks near the lake and the surroundings were very wild, similar to (I presume) the woods Pete Landry — the man at the origin of the tragedies — discovered when he took refuge at Bondrée.

I imagined entirely what Boundary should look like after the death of Pete Landry and I reconfigured the place for the purpose of the novel. I added a few cabins and a camp site around the lake, and I enlarged the lake to have enough room to put all the families that spend their summer in Boundary.

For the rest, I simply worked from my memories, from the memory I had of the lake, of the mountain, of the woods, of the gravel roads, of the colors, of the smells. In fact, the first memory that came back to me before I start the writing of Bondrée was a smell, a smell of fresh rain. After the smell, a lot of images resurfaced, and then, I was ready to write.

I first set the scene and then I imagined a man alone in this wilderness, what it would be like to live there, surrounded by trees, animals, and trees again, and have no one to speak to. I then brought a few people near the lake, and the story really began when the lonely man, Pete Landry, fell in love with the red dresses and the long dark hair of Maggie Harrison, when he went mad and killed himself in his cabin.

The tragedies that occur twenty years later, after a few families have constructed cottages near the lake, are directly related to Landry and to Landry’s only friend, who never forgot why Landry hung himself in his cabin.

4. There are many boundaries/borders that are delineated and crossed in the novel—Canadian/American, French/English, etc. Can you discuss what it is about these kinds of borderlands that makes them such compelling themes for fiction?

I chose to set Boundary on the Canadian/U.S. border because the Boundary I knew when I was a little girl was precisely on the border. After that, I realized that the question of boundaries and borders was very rich and that Boundary was the ideal place to look into this question.

I also have to say that Boundary is the third novel of a trilogy (started with Mirror Lake and Lazy Bird) in which I touch on the differences and the similarities between French Canadian and American people through their languages, their sense of space, their culture, and also through the climate and the geography of the province of Quebec and these of states nearby the border.

In Boundary, I’m going further, because the story is set exactly on the border, where the differences disappear or, on the contrary, are accentuated by the proximity of the other.

5. While it’s a riveting crime drama, the novel is as much about the effects of these tragic events on individuals and the community as a whole. Can you tell us how you balance the momentum of a crime-based plot with the nuanced emotional portrayal of those affected by the crime?

I don’t know. I didn’t want the novel to be based only on the murders that occurred in Boundary Pond. I wanted to write a novel, precisely, about what affects you when violence is not only on your TV screen, but right beside you, when people you know are suddenly the victims of violent crimes. You can’t be unconcerned when your young neighbor is the victim, when the next victim should be your daughter, and when you don’t know where the rage comes from.

6. While the narrative is told through many very different characters’ points of view, there are two main characters who interpret a lot of the action, Andrée and Inspector Michaud. What did having these two key perspectives allow you to do that the traditional cop-focussed procedural would not have allowed?

The character of Andrée allowed me to take the point of view of a child who doesn’t know the world can collapse in one night, of a happy child who is suddenly confronted with death, with the sense of the words never again, disappearance, forever. Andrée also allowed me to bring some light into a very dark story, to talk about the paradise Boundary Pond was before the tragic summer of ’67.

Michaud, on the other hand, is that king of a man who tries, day after day, to understand an incomprehensible violence. He is an exhausted man, who dreams of lightness, but who is not able to ignore the darkness of the human soul, of the human spirit and who wants justice for all the young victims that haunt him.

7. Is there a question (or anecdote) about this book or the writing of it that you’ve never been asked about and wish people would?

As I already said, I never came back to Bondrée since the death of my father, but the place has grown and today there’s a lot of cabins and hunters around the lake. Since the publication of Bondrée, I met three hunters I had never met before who bought the book because of its title. One of them told me that his father bought a copy of Bondrée for every member of his family. Another told me that a school teacher, who has known Bondrée for a long time, bought a book for each of his friends. It proves that everyone in the region knows Bondrée, that everyone is proud of its origins, and that literature can gather people of very different backgrounds.

8. What are you reading right now? And what is one book that you have returned to again and again (either throughout your life or repeatedly during one particular period of your life)?

I’m reading Quand sort la recluse, the last novel of Fred Vargas, a French writer that I love for her (Fred is a woman) sense of humour, her unique way of telling stories, her completely wild imagination. I also just finished Le chemin s’arrêtera là, a novel by Pascal Dessaint, another French writer I just discovered and who I will surely read again, and Justice, an essay by Michael J. Sandel.

There is no book I return again and again, but there are a few novels I have read two or three times: To the Lighthouse, by Virginia Woolf, The Sound and the Fury, by William Faulkner, Monsieur Songe, by Robert Pinget, Pleine lune, by Antonio Muñoz Molina, Demain dans la bataille pense à moi, by Javier Marías. 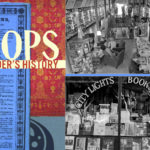 IN THE MEDIA: Bookshops by Jorge Carrión
Scroll to top