Cecil Foster’s They Call Me George, about Black train porter activism and how it shaped unions and race relations in the US and Canada, hits U.S. shelves on May 21. The book’s US release coincides with the 125th anniversary of the landmark Pullman car porter strike, a turning point in US labour history. 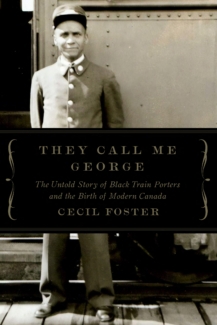 They Call Me George was released in Canada earlier this year and quickly became a best-seller. The book has received plaudits from the Globe and Mail (“excavates a chapter of Canadian history that has been largely erased from the collective memory”) to the Caribbean Camera (“a riveting tour de force written by an award winning, master story-teller”)to the Winnipeg Free Press, who called the book “A bold book by a self-assured scholar who has rewritten our conventional history.”

Click through to check out Cecil Foster’s interview on TV Ontario’s The Agenda as well as his feature interview in the Toronto Star!

An Interview with Elise Levine, author of THIS WICKED TONGUE Poetry on May 21: Shane Neilson’s NEW BRUNSWICK arrives in Canada and...
Scroll to top