Join Books in Common NW for the North American virtual launch of Patrick McCabe’s Poguemahone (May 3, 2022)! Hosted by James Crossley, the event will feature Patrick McCabe as he delves into his new book. This virtual launch will take place on Sunday, May 15 at 3PM ET.

Order your copy of Poguemahone from Biblioasis here!

Patrick McCabe was born in 1955 in Clones, Country Monaghan. He was a teacher and then he was not, having become a full-time writer. He is the author of The Butcher Boy, which won the Irish Times Irish Literature Prize for Fiction; The Dead School; Breakfast on Pluto and others. The Butcher Boy and Breakfast on Pluto were both shortlisted for the Booker Prize and adapted into feature films by Neil Jordan. Winterwood was named the 2007 Hughes & Hughes/Irish Independent Irish Novel of the Year. His next novel is a chillingly amusing chronicle of political and cultural life in 60s and 70s Dublin, called Watertown.

MURDER ON THE INSIDE: Catherine Fogarty signing at Novel Idea Bookstore! 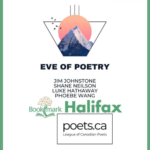 Luke Hathaway at Spring Has Sprung Reading
Scroll to top