Russell Banks will be interviewed about his new novel FOREGONE. The conversation will take part on One Page’s virtual event platform and will consist of a 40-45 minute discussion about the book, followed by 10-15 minutes of Q&A. More details TBA.

One Page: Canada’s Virtual Literary Series is a national consortium of Canada’s libraries and literary festivals, founded in June 2020 by seven of Canada’s biggest literary organizations. We currently represent a network of more than 60 partners, potentially reaching tens of thousands of Canadian book and culture lovers from downtown Halifax to the Sunshine Coast of Vancouver Island and nearly every market in between. Some of our most recent guest writers have included Barbara Kingsolver, Anne Enright, Jo Nesbo, Samantha Irby, André Aciman and more.

In his late seventies and dying of cancer, acclaimed Canadian-American documentary filmmaker Leonard Fife, one of sixty thousand draft dodgers and deserters who fled to Canada to avoid the Vietnam War, agrees to a final interview conducted by his acolyte and former student. But unbeknownst to Malcolm, who imagines his portrait of the master will cement his own reputation, Fife has his own plans: an astonishing, dark confession that reaches back to his young adulthood across the border and beyond, witnessed by his wife and the filmmaker’s crew, who struggle to make sense of the dying man’s long-held secrets. Alternating between Fife’s private memories and his efforts to relate them to his listeners, FOREGONE is a brilliantly structured examination of memory, destiny, and truth.

Pre-order from your local bookstore or from our website 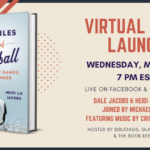 Murder on the Inside Virtual Book Launch
Scroll to top