The Voices of Ghosts

A long-buried bone found in the forest. A generation of women united by unspoken trauma. Mass graves unearthed. Voices united in protest. A secret that can no longer be hushed, and the slow, quixotic quest to bring those responsible to justice. In this event, Judith McCormack (The Singing Forest) is joined by author Kim Echlin (Speak, Silence) for a reading and conversation with Hal Wake about different wars from different eras, both with devastating human tolls for the victims and the survivors who bear the scars of generational trauma. The event will take place on Friday, September 24 at 2:00PM EDT.

Preorder your copy from Biblioasis here!

Rinaldo Walcott at Word On The Street 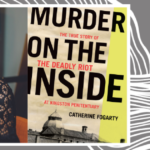 Muder on the Inside at Kingston WritersFest
Scroll to top