Don’t miss acclaimed American writer and twice finalist for the Pulitzer Prize Russell Banks grace the TIFA virtual stage to present his alluring new novel, Foregone! Join Banks in compelling conversation about the mysteries that unfold on a man’s deathbed through fragments of his ominous past, when memory and imagination dissolve and when truth and redemption compete with artistic ambition. The event will take place on Wednesday, October 27 at 5:30PM EDT.

On Time and Water: Andri Snær Magnason at TIFA 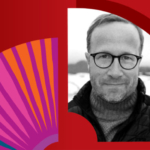