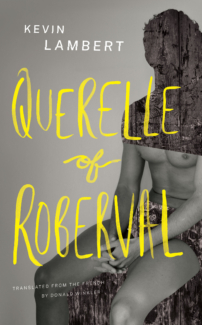 Join us in celebrating the launch of Querelle of Roberval by Kevin Lambert, trans. by Donald Winkler (August 2, 2022)! Kevin will be appearing in conversation with fellow author Heather O’Neill for a reading from the book and a Q&A. The launch will take place at Notre Dame des Quilles in Montreal on Wednesday, October 12 at 7PM ET.

Get your copy of Querelle of Roberval here!

In this session of The Re-Read, Stéfanie Clermont (The Music Game) will delve into the 1965 French-Canadian classic A Season in the Life of Emmanuel by Marie-Claire Blais. Recognized as a masterwork of fiction, the[...]
View Calendar
Add