Join author Mark Bourrie at the Windsor Yacht Club! Mark will be attending a lunch at the club, where he will be reading and signing copies of his books, Big Men Fear Me and Bush Runner. The event will take place on Saturday, April 22 at 12PM ET.

Get your copy of Big Men Fear Me here!

Get your copy of Bush Runner, here! 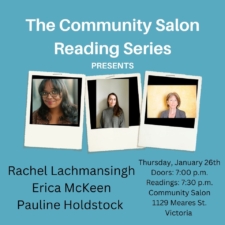 Please join us at the first event of The Community Salon Reading Series! Pauline Holdstock will read from her latest novel, Confessions with Keith (Sep 2022) alongside Erica McKeen, reading from her debut novel, Tear[...]
Feb
2
Thu
6:00 pm Luke Hathaway at Lit Live
Luke Hathaway at Lit Live
Feb 2 @ 6:00 pm – 7:00 pm
Luke Hathaway will be reading from The Affirmations (April 5, 2022) at Lit Live on Thursday, February 2, 2023. Time and details TBA. Grab a copy of The Affirmations here! ABOUT THE AFFIRMATIONS “…a trans-mystical work of love[...]
Apr
22
Sat
12:00 pm Mark Bourrie at the Windsor Yach... @ Windsor Yacht Club
Mark Bourrie at the Windsor Yach... @ Windsor Yacht Club
Apr 22 @ 12:00 pm – 2:00 pm
Join author Mark Bourrie at the Windsor Yacht Club! Mark will be attending a lunch at the club, where he will be reading and signing copies of his books, Big Men Fear Me and Bush[...]
View Calendar
Add