My Ghost Story by Seth

You are here: Home / My Ghost Story by Seth

ENTER HERE BY DEC. 15th TO WIN A SET OF CHRISTMAS GHOST STORIES SIGNED BY SETH. 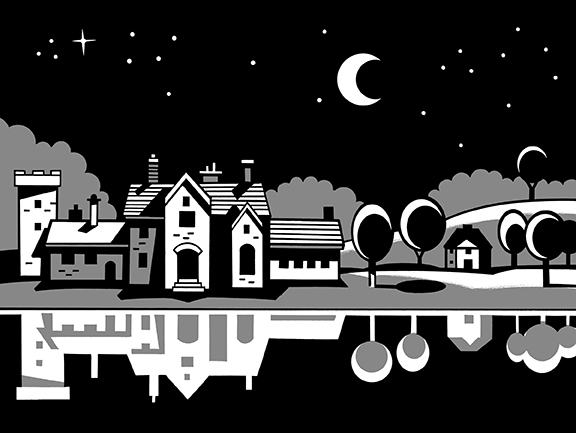 That said, like most everyone in the world I have my own “real” ghost story. Let me start this off with the usual disclaimer. I don’t believe in ghosts. Or, maybe, I don’t believe in ghosts. I don’t think there is much basis for believing in the supernatural. I could be wrong but I suppose my bets are usually placed on dull reality rather than the more interesting realms of the mystic.

My ghost experience occurred about a decade ago when I was visiting a small Vermont town named White River Junction. I was there to give a lecture at my friend James Sturm’s cartooning school, The Centre for Cartoon Studies. White River Junction is a charming little town with a lingering grey-brown atmosphere of the industrial mid-20th century America about it. As the name implies it was once an important railroad hub. Today it is an artsy conglomerate of trendy stores, coffee shops and tapas bars. Right downtown sits the imposing Hotel Coolidge—a giant hulk of an ancient railway hotel. Still in business and the place where the cartoon school always houses it guests. I’d stayed there once before and liked the place. Its dreary maze of endless dark hallways appealed to my old time sensibilities. I don’t want to overstate it but there is something of the Overlook Hotel about the place. I was booked in for two nights.

On the first night I stayed up reading until rather late. Around 2 AM. Tired, I turned out the light and in the few moments before sleep I heard, very close by, the distinct sound of a human sigh. Just once. I thought it a bit odd but nothing to take notice of. I suspected it came from the next room. The walls were probably thin. I didn’t remember then that there was no one else in any of the rooms down my end of the dark hallway. In fact, I wouldn’t even recall this event if it wasn’t for what happened the next night.

The next night. This is the event I will never forget. Same routine. Up late reading. Finally turning in around 2 or so. I click out the light. It’s a very dark room. Pitch. I should mention I’m in a big bed. I’m scrunched over on one side—the left side. As I prepare my mind for sleep something bizarre happens. I’m not even quite sure how to say this—but here goes—suddenly from nowhere a tremendous weight drops onto the right side of the bed. As if a human body had just fallen from several feet above directly onto the bed. Not like someone had jumped, from the side, onto the bed—no, somehow I knew that the figure had come from DIRECTLY above.

Now, I suppose you’d imagine that that in such an instance you’d instantly turn, open your eyes and check to see what was going on. Or, at the very least, leap up off the bed. Either would make sense.

That’s not what I did. Instead I was seized by an overwhelming terror. I did not move. I did not open my eyes. I stayed there, facing the ceiling, utterly frozen for what seemed a very long series of minutes. I was convinced that someone was lying next to me but I was far too afraid to move or open my eyes to see just who it might be.

Finally, excruciatingly, I forced myself to turn my head toward the night table, open my eyes, and click on the light. I remember the tingle of dread upon me as I swivelled my head around to face the right side of the bed. The completely empty right side of the bed. There was nothing there. Of course there was nothing there. Nor was there anyone in the room. Nor was there any evidence of anything out of the norm.

I stayed up a while with the light on anyway.

I don’t think I told my friend James about this experience the next day. I don’t think I told anyone about it for the long time. It didn’t convince me of the supernatural. Who can say what that event was all about? I will insist that it was not a dream but perhaps it was something else explainable. Night Terrors? I don’t know. All I know is that I was very frightened. And whatever happened there, it was very real.

Transparent City is a July Pick for the Portuguese in Translation Book Club! Join Ondjaki, author of Transparent City (May 15, 2018), and translator Stephen Henighan as they talk translation. The event will take place online[...]
View Calendar
Add