“Reads like a cross between the dearly departed Anthony Bourdain and Stephanie Danler’s Sweetbitter, combining the complicated life of a kitchen wretch with a highly literate voice…hypnotizing.”—Kirkus 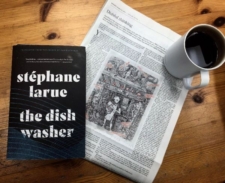 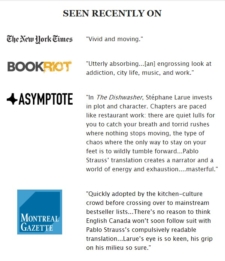 Translated into English for the first time by Pablo Strauss

Winner of the Quebec Booksellers’ Prize

Shortlisted for the Governor General’s Award
for French-language Fiction

Check out what other booksellers have already said about The Dishwasher:

“The Dishwasher is a gruff-yet-affable working class lament, seasoned with hangdog determination and bleary verisimilitude. From the bar booths to the slop sinks to the shooting galleries of a painstakingly rendered Montreal, Larue proves himself a more than adept raconteur of blackout debauchery and wage labor drudgery. Think Nelson Algren by way of Bud Smith, such is the hardscrabble exactitude on offer in this wincing grin of a novel. An industrious and absorbing slab of cutthroat cuisine, Québécois death metal, and gambler’s dilemmas.”
—Justin Walls, Powell’s Books (Portland, OR)

“I’ve never been to Montreal but I have worked in restaurants and Stéphane Larue’s The Dishwasher made me feel as if I do know that world in great, mad, detail. More importantly, it goes so beyond being a food industry novel or a novel about metal or gambling, it is a book that is both tender and tough. I appreciate this book for all that it must’ve taken to create–it is a wondrous thing.”
—Hans Weyandt, Milkweed Bookstore (Minneapolis, MN)

“A simple story of a want-to-be-artist that has to come to terms with the reality of his vices and get out of his own way. The pacing and phrasing of this novel is in beautiful contrast to the raw story told. The sense of place is unforgettable. From the behind the scenes look of working in a restaurant to the weight of addiction, I devoured every page as I found myself hopeful for the underdog in this brilliant debut.”
—Shannon Alden, Literati Bookstore (Ann Arbor, MI)

“All I did last weekend was read The Dishwasher.”
—Caitlin Luce Baker, Island Books (Seattle, WA)

“The Dishwasher is a tragi-comic adventure through the dark underbelly of a high end Montreal restaurant kitchen that follows a down on his luck 30-something brilliantly talented artist with fabulous taste in music and a little gambling addiction.  As much a  philosophical dive into life, love, trust, obsession, and heavy metal as just a damn good story, the Dishwasher made me laugh, cringe,shake my head and  drool over amazing food. I absolutely just couldn’t put this  quirky cool debut novel by Canadian author Larue that is just perfect for fans of David Sedaris or Anthony Bourdain.”
—Angie Tally, The Country Bookshop (Southern Pines, NC)