Blog - Latest News
You are here: Home / Latest News / Mark Bourrie Challenges Us to Retire the Word “Explorer” from...

The first English-language biography in nearly a century of Pierre-Esprit Radisson—pirate, cannibal, and co-founder of the Hudson’s Bay Company—is set to appear at a bookstore near you on April 2, 2019.

Radisson’s story complicates all of our settled ideas about the European conquest of North America. This “eager hustler with no known scruples” was the Forrest Gump of the seventeenth century. A Mohawk raiding party into present-day Indiana? Radisson was there. London’s Great Plague and Great Fire? There. A shipwreck on the reefs of Venezuela? There. The courts of Charles I and Louis XIV? He was there, too.

So how does a co-founder of the longest-lived corporation in North America, a “free man in a time when they were rare,” die penniless in London? Drawing directly from Radisson’s journals, Mark Bourrie paints a vivid picture of the class and national tensions that gripped the globe tightly even as colonial ownership of specific territories shifted with the seasons. Bush Runner brings Radisson to life: a man adopted as a teenager into a Mohawk family before his ocean-crossing adulthood, a peddler of goods and not of worldview, more trading partner than colonizer, “a brave man who must have been a tremendous dinner companion—as long as you weren’t on the menu.”

In spinning this true adventure yarn—complete with piracy, espionage, double-crosses, and the consumption of human flesh—Bourrie offers a fresh perspective on the world in which Radisson lived, the world in which his legacy both does and does not live on. 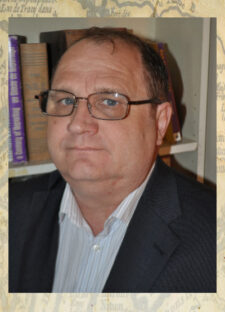 To get some insight into Radisson’s story and what it means for us in the twenty-first century, we sat down for an interview with Bush Runner author Mark Bourrie.

I’m a lawyer, a journalist and an author with a PhD in Canadian History. I usually write about very depressing things: politics, propaganda, law. My book on Stephen Harper’s media control was a great seller but a depressing thing to write, and, probably, to read. I suppose my next book will also be very serious and frightening.

What inspired you to write a book about Radisson?

About fifteen years ago, I looked Radisson up in an encyclopedia. I’m not sure why. I knew Radisson and his brother-in-law Groselliers had been fur traders in New France and had defected to the English. They had opened Hudson Bay to the fur trade. Everyone who stayed awake in high school knows that. But then I saw Radisson had lived among the Mohawks, had escaped through New Amsterdam (New York City), had lived among the Sioux. All that seemed interesting enough. But then I saw he was in London in 1665. That was the Great Plague. And stuck there during the Great Fire of 1666, when the whole city burned down. And had defected back to the French, been marooned with pirates in the Caribbean, and then double-betrayed the French. This was quite a life.

When I signed with Biblioasis to do the book, I thought it was a book we needed now, as a break from all the troubling modern political non-fiction. Radisson lived in a whole other universe. He lived a life that no one could live now. He had adventures, saw amazing things, and had a huge personality. He was also completely untrustworthy, and would eat you or your dog if he thought he needed to.

What was it like to work with Radisson’s newly-opened journals? Did you discover anything about his life or his era that particularly surprised you?

Many of Radisson’s writings were found a century ago, but new material was found recently by a member of his family who had special access to the royal archives at Windsor Castle. I have read a lot of autobiography from this period, and Radisson’s is special. First, he wrote most of it in English. Radisson had a genius for languages. The next thing that stood out—partly because I came across it early, and partly because it’s timely now and unusual for the time—was Radisson’s admiration for Indigenous people, especially the Mohawks who adopted him. Radisson saw them as equals and many of them as family. Third was the often-humorous brutal honesty about himself. Radisson admits to some very sleazy things, including cannibalism. That’s in a memoir meant only for King Charles II’s eyes. I wondered what kind of man who is looking to do business with a king of England admits to eating people? There are parts of his writing that are self-serving and sections that are, to be charitable, exaggerations. But he wrote about himself in a way that I’ve never seen in the literature of that time. I think I got to know him very well. It was like living with a bratty teenager.

What do you think 21st century readers can learn from Radisson’s experiences?

Take risks. Have fun. Keep yourself open to new opportunities. Be candid about yourself. Sue people if you must. Stay off social media. (Radisson never had a Twitter account). If you do all those things, someone might name a hotel chain after you for no apparent reason and strangers might write books about you..

What will readers really get from this book? A story that reads like a TV series or movie trilogy.

I have decided to cleanse my palate of modern political writing and the books I have read on law and politics, and have gone back into my library to read first-rate writing. I am re-reading Dispatches by Michael Herr and just sent away for Disturber of the Peace, William Manchester’s biography of H.L. Mencken. I also want to re-read Olive Dickason’s The Law of Nations and the New World. Olive was a Metis scholar and a friend, and I would like to see if her ideas on law and colonization still hold up.

Raves for Mia Couto’s RAIN AND OTHER STORIES We can hardly contain our excitement about DUCKS, NEWBURYPORT by Lucy Ellma...
Scroll to top