On Writing and Failure (ebook)

Writing is, and always will be, an act defined by failure. The best plan is to just get used to it.

Failure is a topic discussed in every creative writing department in the world, but this is the book every beginning writer should have on their shelf to prepare them—which is to say, to console them in their misery. Less a guide to writing and more a guide to how to simply keep on going, On Failure: The Peculiar Perseverance Required to Endure the Life of a Writer describes the defining role played by rejection in literary endeavors and contemplates failure as the essence of the writer’s life. Along with his own history of rejection, Marche offers an historical framework—from Ovid’s exile and Dostoevsky’s mock execution to more contemporary tribulations—through which to consider rejection, and addresses the impact of the widespread decline of humanism on the twenty-first century writing life.

“How Shakespeare Changed Everything is fun and informative, with more than its share of ‘Aha!’ moments packed between its diminutive covers. Mr. Marche’s thesis is compelling and probably more true than we ever imagined.”
—New York Journal of Books

“So dazzling, so unsentimental … A work that is both beautiful and confusing. In other words, an honest love story.”
—New York Times

“Brilliant … Marche has created a stunning, evocative, and impressionistic account of the ascent of wealth in the twentieth century. . . . The Hunger of the Wolf could be Marche’s breakthrough novel.”
—Booklist, starred review

“A dazzling virtuoso piece. Marche turns the making of a family’s fortune into a fascinating, bloody fairy tale.”
—Emma Donoghue, author of Room and Frog Music

“Untrammelled, unfettered, unprecedented, unselfconscious and friggin’ unbelievable, this book busts the novel open, makes literature an open question, and maps out brave new worlds for the reader to spelunk. With Raymond and Hannah I knew this guy was up to something brilliant. Shining at the Bottom of the Sea tells me I hadn’t the faintest idea.”
—Daniel Handler, author of Adverbs

On Writing and Failure (trade paper) 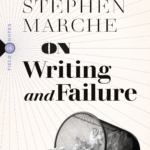 On Writing and Failure: Or, On the Peculiar Perseverance Required to Endure...
Scroll to top