A verse epic for the 21st century, Poguemahone combines the fragmentation of cummings and Williams and the spontaneity of Ginsberg and Ferlinghetti with a soundtrack by Mott the Hoople, then douses it in whisky and sets it on fire. Ancient as myth and wholly original, Poguemahone is a masterpiece of formal invention with the rollicking clip of a drinking song and the devastating story of one family’s history—and the forces, seen and unseen, that make their fate.

Una Fogarty, suffering from dementia in a Margate care home, would be alone were it not for her brother Dan, whose free verse monologue tells the story of their clan. Exile from Ireland and immigrant life in England. Their mother’s trials as a call girl. Young Una’s search for love in a hippie squat in Kilburn, and the two-timing Scottish poet and stoner whose vatic recitals and prog rock vibes she’ll never get over. Not to mention the squat itself, seemingly haunted by vindictive ghosts who eat away at the sanity of all who lived there. Now she sits outside in the Margate sun as her memories unspool from Dan’s mouth, whose own role in her story grows ever stranger—and more sinister. 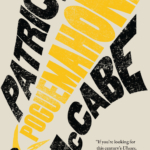