Rain and Other Stories (eBook) 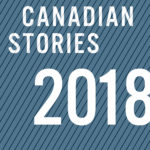