“Dead Heat is about an empty world . . . its language full of slang, its elocution prizing sexuality, violence and luxury goods. Its hallucinatory moments call to mind classics of 20th-century American literature like Bret Easton Ellis, Raymond Carver or Hunter S. Thompson, or the cult movie Trainspotting and the violence of youth at its centre reminds us of Golding’s Lord of the Flies.”—Magyar Narancs

“Dead Heat is a no-holds-barred portrait of adolescents adrift . . . The blue waters of the Danube have never looked this troubled.”—Paris Match

“Benedek Totth darkens his pages with a boundless talent. He writes like a man screaming, moved by furious desperation. Totth’s dialogues show that he understands the power of humour, and he also knows that the world moves too fast and leaves those who don’t know how to swim at the edge of the pool. A devastating, beautiful Noir novel.”—L’Express (Paris) 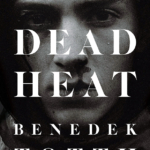