By the Booker-shortlisted author of Ducks, Newburyport, a formally madcap and prescient novel about men (and women), mangos (and bees), and modern love.

George is a poet, desperate to finish his epic poem (about ice hockey) and pining over his lost love (Eloïse). Eloïse, meanwhile, is a misfit, hermiting away—or attempting to—in the countryside cottage she bought with her inheritance, where she spends her days writing letters to famous men who hate women, as well as famous women who hate women (e.g. the Queen), the producers of shoddy products (poorly sized toilet paper roll holders), and entities which frighten her cats with inappropriate piloting of helicopters (the RAF). She and George are both melancholics, and should be together, yet tragically are not. Really, though, amidst the horrors of the modern world, how can any two people be expected to find love? Told from their twin points of view, Man or Mango?: A Lament is a transatlantic novel of unrequited love and modern loneliness.

“This book has its face pressed up against the pane of the present; its form mimics the way our minds move now toggling between tabs, between the needs of small children and aging parents, between news of ecological collapse and school shootings while somehow remembering to pay taxes and fold the laundry.”
—Parul Sehgal, New York Times

“Ellmann captures the pathos of the everyday, how one might use pie crusts and film synopses to dam in pain … The time and care that she lavishes on her narrator seem like their own form of political speculation—that every individual is owed an unending devotion, and that such devotion, applied universally, might change the fate of the world.”
—New Yorker

“A sublime literary enactment of how guilt, grief, rage, regret, compassion, and every other emotion swirls and ebbs in unbalanced defiance of rational logic … If art is measured by how skillfully it holds a mirror up to society, then Ellmann has surely written the most important novel of this era.”
—The Paris Review 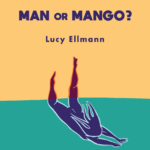 Man or Mango?
Scroll to top