Leafs fans remember the ups. And, oh boy, do they remember the downs. But how many know Harry “Big Mum” Mummery’s (1911-1923) habit of broiling a steak on a shovel over the Mutual Street Arena’s coal furnace before each home game? Or that two-time Stanley Cup champ Ken Randall (1917-1927) once paid a fine with a sack of pennies? Or that legendary goalie Johnny “The China Wall” Bower (1958-69) wrote and recorded a children’s Christmas song that charted with The Beatles’ “Yesterday” on Toronto’s Top 100 list?

In this quirky collection of stories from the first century of the Toronto Maple Leafs’ history, renowned hockey columnist Bob Duff offers over 200 of the most memorable, unlikely anecdotes that all fans of the old Blue-and-White are sure to love.

“Chief among the more enjoyable books this year … a love letter to the Golden Age Red Wings.”—DETROIT METRO TIMES

“The photos steal the show … All the Original Six teams deserve a book this special.”—HOCKEYBOOKREVIEWS.COM

“Visually captures the Original Six glory years of the Red Wings in a way rarely seen before … a great gift for any hockey fan.”—HOMETOWN LIFE 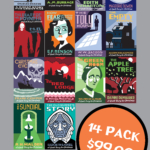 The Redemption of Galen Pike
Scroll to top