You are here: Home / Andreae Callanan 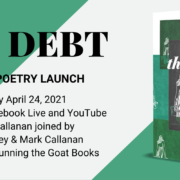 Over the weekend we celebrated the launch of Andreae Callanan’s poetry collection, The Debt! Andreae Callanan was joined in conversation by Elaine Feeney, and the event was emceed wonderfully by Mark Callanan. The launch finished off with an audience Q&A, and a successful book giveaway. The event was also co-hosted by Running the Goat Books in Tors Cove, NL.

And if you couldn’t make it, don’t worry! You can still watch here:

Andreae Callanan’s poetry, essays, and reviews have been read in The Walrus, Canadian Notes and Queries, Canadian Verse 2, Riddle Fence, CBC.ca, and The Newfoundland Quarterly. She is a recent recipient of the Cox & Palmer SPARKS Creative Writing Award at Memorial University of Newfoundland, and she holds a Vanier Canada Graduate Scholarship and a Pierre Elliott Trudeau Foundation Scholarship for her doctoral work in English literature. Her chapbook, Crown, was published by Anstruther Press in 2019. Andreae lives in St. John’s with her husband and their four children.

Pre-order your copy from Running the Goat Bookstore

Learn more about The Debt, or pre-order your copy, from Biblioasis