You are here: Home / booksellers 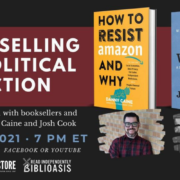 Last night we held a fascinating discussion between booksellers and writers, Danny Caine (How To Resist Amazon and Why) and Josh Cook (The Least We Can Do)! The event was coordinated with The Raven Bookstore. Afterward, there was an audience Q&A and a chance to win copies of both books!

If you didn’t catch the event live, no worries! You can still watch it below: