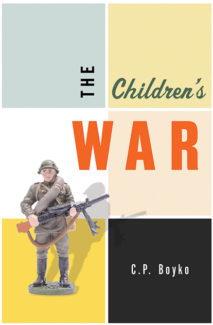 Today’s post is sponsored by independence, and self-governance, and your humble Biblioblogger (along with her Production Goon) being extremely excited about the book we’re about to send off to print: The Children’s War, by the man, the myth, the self-blurbing legend C.P. Boyko. I’d toss in an author photo here, but this is the best we can do. If you’ve never read him, you’re in for a treat, and if you have, well, you know exactly how we feel. Fans new and old can get a head start with “In the Palace of Cats,” excerpted from the story “Andrew and Hillary.”

I sat down (at my keyboard) a few weeks ago to ask Mr. Boyko some questions about his new book, and this was the result.

A Biblioasis Interview with C.P. Boyko, Author of The Children’s War

Q. This, your fourth book, is also your fourth collection of short stories. What draws you to this format, as opposed to, say, novels?

A. I love novels, but often find them too long. I love short stories, but often find them too short. It strikes me as odd to say the least that most fictional stories produced nowadays are under five thousand or over fifty thousand words long. I’ve given myself permission to write stories of any length; in this book, they range from about seven thousand to about forty thousand words long. I am also rather a contrarian, and the mere fact that fictionists seem to be expected to outgrow short stories for novels has probably made me stubborn. I haven’t, however, been able to shake altogether the idea that one unit of fiction is equivalent to one book’s worth. Consequently, I write my stories in groups, with an eye to the collection as a whole. The result, though it is not for me to say so, is, I think, not so very different from a novel.

Q. You seem to have eschewed first-person narration since your first book, Blackouts. Are you aware of this? Is it intentional?

Q. Can you tell me more?

A. Yes. I thought I perceived a tendency of fiction written in the voice of a character to be slangy, sloppy, swaggering, longwinded, and pompously declarative: “Here I am, washing my hands.” There also are many things that a character cannot, or should not, say on their own behalf—because it makes of them either a monster of self-awareness or a monster of self-disclosure, or both. Moreover, to write, as first-person narration encourages one to do, an entire book, or even an entire story, from the point of view of a single character seems to me an impoverishing constraint—like shooting an entire film from a single stationary camera, or telling only one side of a war story.

Q. This is a funny book, the result of finely-tuned irony. Yet despite that, I also found it deeply compassionate: while the characters are often quite comical, in word or deed, they’re not one-dimensional. Could you talk about the role humor plays in your work?

A. I did not set out, as I did with Novelists, to write a funny book, but I’m glad you find it funny. The highest aim of art, John Davidson said, is to give delight. Also, if I may say something unfunny, I think that to leave comedy entirely out of the worlds one builds in prose is to build unrecognizable worlds. The same could be said about tragedy, and about horror—and about love.

Q. As a recovering academic, I was thoroughly taken by “The Purpose of the Music Club” and “The Takeover of Founders’ Hall,” which open and close the collection in institutions of learning—high school and university, respectively. (I also thought the portrait of the writing prof at the end of Novelists especially funny.) Does your interest in academic settings have any particular origin?

A. I am a fully recovered academic.

Q. “Year-End” looks more like a play than a short story. As I was reading, I kept wanting to see it staged, and the central conflict—the clash between owners, management, and unionizing workers at a faltering factory—made it easy to imagine as a performance. How did you decide on the form?

A. It is indeed a play. I hope it’ll be staged often. As for the form, I had never written a play in five kinds of crypto–blank verse before, so I thought I’d give it a try. Even if one cannot altogether reinvent oneself, one tries at least not to repeat oneself.

Q. The vast majority of the characters in “Infantry” are women, which is unusual in itself, and all the more so in a story about soldiers at war—though beyond the names and pronouns, the narrative itself isn’t particularly gendered. Could you talk about the choice to re-imagine the war story in this way?

Q. What was the last book you reread?

A.God Bless You, Mr. Rosewater. It was a little disappointing, to be honest, particularly in the prose.

Q. How do you hope your own prose will be described?

A. “Crystalline,” thank you.

Q. What is your dream blurb?

A. “You’ll never need to read another book.”

Q. Who are you writing for? Who is your ideal reader?

A. Myself, I suppose, in a few years’ time, after I have forgotten the toil of writing and my good intentions, but before my taste has improved too much. If you don’t write to please yourself, pleasing others will never make you feel less lonely.

Q. Well, thank you for your time.

In the Media: Flock of Seagulls 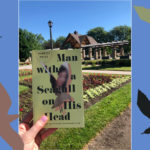 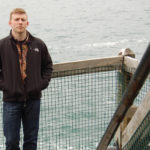